The summary of the recent RNA and Chromatin Club meeting, May 20

In the afternoon of May 20, 2019，RNA and Chromatin Club (RCC) meeting was held in Room A542 of L building. In this meeting, Dr. Zhang Fan from Prof. Roger Kornberg’s lab and Ou Minyi from Prof. Luo Zhen-Ge’s lab shared their new research results with us.

Minyi gave the first talk titled “Heterogeneous Nuclear Ribonucleoprotein A3 Regulates Chromatin Alignment and Mitosis of Cortical Neural Progenitors”. In the beginning of her talk, Minyi explained the evolution of the gyrencephaly and compared the differences between developing human and mouse neocortex, in regard to the origin and importance of neocortex. Species-specific differences in neural progenitor proliferation and differentiation contribute to various brain sizes among different species. Existing research shows that radial glia (RG) and transit amplifying intermediate progenitor (IP) play important roles in the neurogenesis of neocortex. Heterogeneous nuclear ribonucleoproteins (hnRNPs) have been reported to be involved in the maintenance of stem cell self-renewal and development. For her research, Minyi has been focusing on the function of Hnrnpa3 in neurogenesis of neocortex. She found that Hnrnpa3 knockout mice displayed mitotic delay and reduced proliferation of cortical neural progenitors. There was also spindle misalignment of neural progenitor cells accompanied by frequent chromosome breakages in the neocortex of Hnrnpa3 knockout mice. Moreover, she also obtained similar results in human brain organoid. Thus, her research has demonstrated the important functions of Hnrnpa3 in the development of neocortex in both mouse and humans.

The RNA and Chromatin Club (RCC) meetings provide a platform for the students, postdocs and other junior research scientists to share their recent results and freely exchange their ideas. It is also a good opportunity for young scientists to give a talk in English in front of a big audience. This will help them to be prepared for more important talks in their future careers. There are usually two talks in English given by members from two labs in the School of Life Science and Technology (SLST) in ShanghaiTech University. Everyone in SLST is welcome to join us at the next RCC meeting in June. 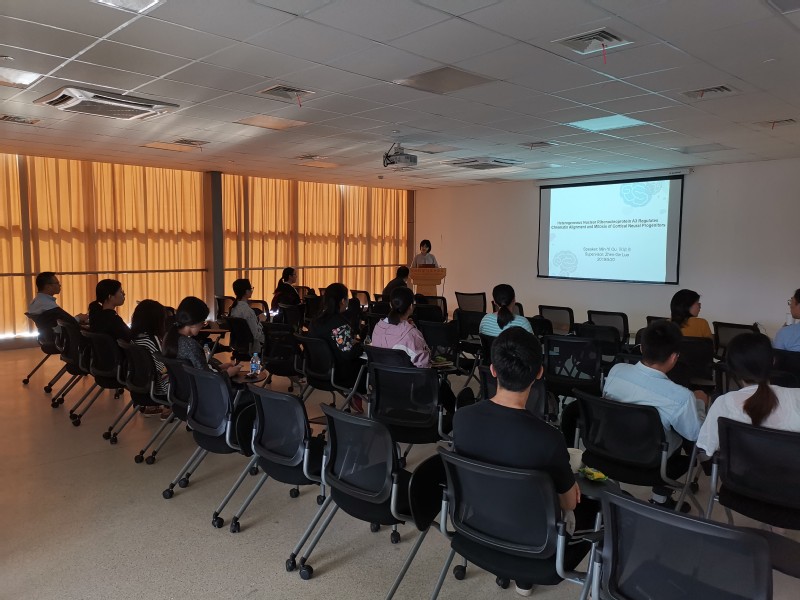