A team of scientists led by Professor Lu Pengfei from SLST has unexpectedly identified that the traditional tight junction protein Occludin does not act as a barrier in epithelial tissue as expected. Instead, Occludin plays a vital role in the regulation of extremely basic and important protein production and secretion. On February 13th, 2020, the work from Lu's lab was published online as a research article entitled “Occludin Protects Secretory Cells from ER Stress by Facilitating SNARE-Dependent Apical Protein Exocytosis” in PNAS.

Protein secretion is one of the most basic biological processes in cells. Proteins including hormones and enzymes, which are secreted to the extracellular environment through the endoplasmic reticulum (ER) and Golgi apparatus, participate in many physiological processes and are very important for intercellular communication. However, it remains unclear how some professionally secretory cells, such as hair cells in the ear and chief cells in the stomach, accelerate the secretion of proteins to avoid excessive accumulation of intracellular proteins.

Lu's group found that the Occludin knockout female mice are not able to suckle pups due to the decline of milk production. Unexpectedly, Occludin null mammary glands show intact tight junction function and normal epithelial morphogenesis, cell differentiation, and tissue polarity, suggesting that Occludin is not required for these processes. Using single-cell transcriptomics, the team identified milk-producing cells (MPCs) and found they were progressively more prone to ER stress as protein production increased exponentially during late pregnancy and lactation. Importantly, Occludin loss in MPCs results in greatly heightened ER stress. This, in turn, leads to increased apoptosis and acute shutdown of protein expression, ultimately leading to lactation failure in the mutant mice. Furthermore, Occludin is localized on the secretory vesicles and interacts with the SNARE (Soluble Nethylmaleimide-sensitive factor Attachment Protein Receptor) proteins which are essential regulators of protein secretion, suggesting that Occludin improves the secretion efficiency of protein through interaction with SNARE proteins, thereby ensuring the production of postpartum milk protein. This work not only opens a new door for understanding the process of protein production, transportation and secretion, but also provides the theoretical evidence and the therapeutic target of various diseases caused by the absence of Occludin, such as hearing loss and infertility.

Professor Lu Pengfei is the corresponding author of this study. This work was supported by grants from the Ministry of Science and Technology of China, National Science Foundation of China, and startup funds from ShanghaiTech University. 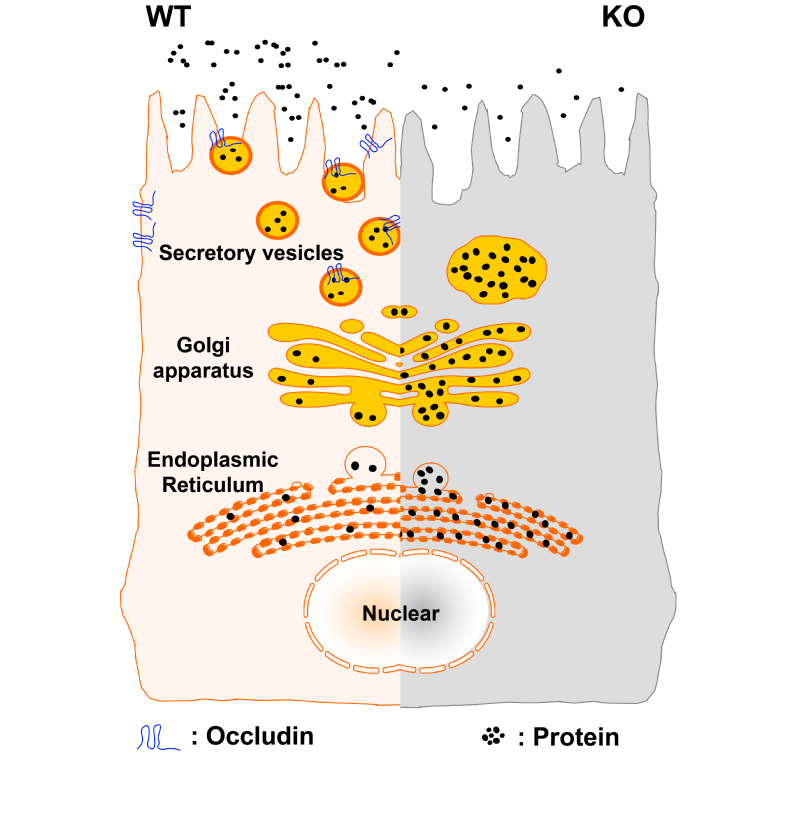 The process of intracellular protein secretion. In wild-type cells, Occludin can promote rapid and effective secretion after a large amount of proteins is expressed. However, in mutant cells, proteins cannot be secreted in time, resulting in various defects including inability to produce milk and infertility.