Genomic imprinting is essential for mammalian embryonic development, and is an epigenetic phenomenon present in higher animals and plants. Dysregulation of the imprinted genes causes diabetes, cancer and neurological disorders. Understanding the expression regulation mechanism of imprinted genes can help us understand human individual development and disease etiology and treatment.

In a previous study, Prof. Li Xiajun’s group from SLST discovered that ZFP57 is a key regulator in genomic imprinting, and it maintains DNA methylation imprint at the Imprinting Control Regions (ICRs) of the target imprinted regions. They also found that Zfp57 mutants displayed maternal-zygotic effect, the first one identified in mammals. On January 27, 2021 Li’s group and their collaborators published a paper entitled “ZFP57 dictates allelic expression switch of target imprinted genes” in PNAS, revealing how ZFP57 controls the allelic expression switch of target imprinted genes.

In this study, ZFP57 can regulate the NOTCH signaling pathway in mouse embryos by impacting allelic expression as well as expression levels of a few regulators in the NOTCH signaling pathway based on RNA-seq analyses. These findings will help to uncover the underlying mechanisms in human diseases which are related to pathogenesis of imprinting. In addition, they may also provide insights into other mono-allelic expression phenomena that occur in the olfactory receptor and protocadherin genes in the nervous system, the antigen receptor genes in the immune system and X chromosome inactivation in females. 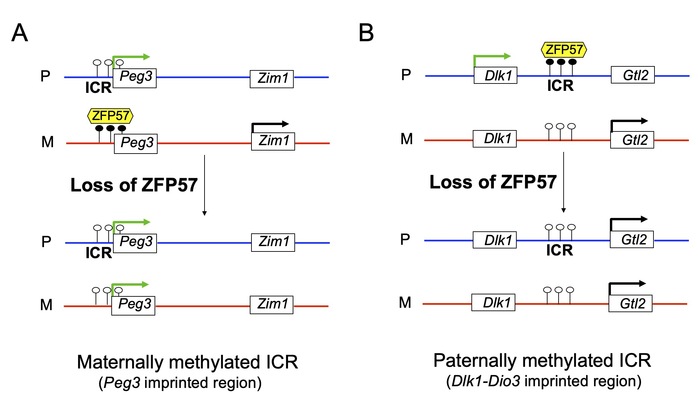 Fig. 1. Diagrams are shown for ZFP57-mediated regulation of DNA methylation imprint and allelic expression of the corresponding imprinted genes