Professor Wang’s research interests are focused on the mechanism of neurodegenerative disease-related proteins, and the interconnection between neurodegenerative diseases and neuroinflammation. His laboratory did a series of work related to the ALS mechanism and has published more than 60 papers in this field.Amyotrophic lateral sclerosis (ALS) is a fatal neurodegenerative disease that is characterized by selective loss of motor neurons in brain and spinal cord. Multiple genetic factors have been identified to be associated with ALS, including TDP-43, FUS, OPTN and C9ORF72. TDP-43 was identified as a major protein that is tightly associated with the pathogenesis in ALS, frontotemporal lobar degeneration (FTLD), and other neurodegenerative disease, in which TDP-43-positive cytoplasmic aggregates are presented in diseased brains. Professor Wang’s group found that loss of TDP-43 strongly induced a nuclear translocation of TFEB, the master regulator of lysosomal biogenesis and autophagy, through targeting the mTORC1 key component raptor. Meanwhile, loss of TDP-43 also impaired the fusion of autophagosomes with lysosomes through dynactin 1 downregulation, leading to the accumulation of immature autophagic vesicles. By using the Drosophila model with depletion of TDP-43, the inhibition of mTORC1 signaling by rapamycin treatment aggravated the neurodegenerative phenotype, whereas activation of mTORC1 signaling by PA treatment ameliorated the neurodegenerative phenotype, suggesting that impaired mTORC1 signaling may contribute to TDP-43-mediated protein aggregation and neurodegeneration.

The talk was followed by an extensive and thorough discussion. After that, Professor Wang had 1 on 1 meetings with several professors. 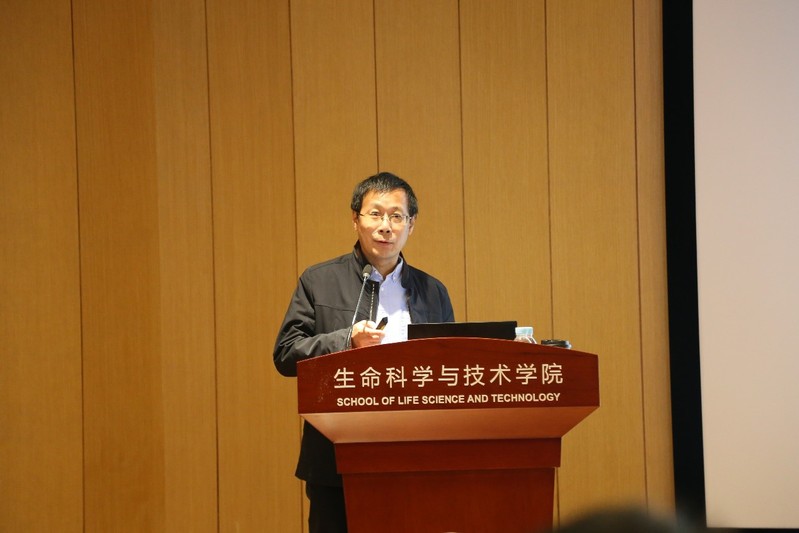