On July 28, Li Na et al. from Zhu Lab from the School of Life Science and Technology published research titled A sphingolipid-mTORC1 nutrient-sensing pathway regulates animal development by an intestinal peroxisome relocation dependent gut-brain crosstalk in the journal Cell Reports. Using Caenorhabditis elegans as the model organism, this study found that the subcellular localization of peroxisomes in intestinal cells and the hormonal signals they produce could mediate the inter-tissue regulation of animal development via a sphingolipid/mTORC1 nutrient-sensing pathways.

How animals adjust their developmental fate to adapt to the environment by sensing the nutrition availability has been a long-standing problem that has fascinated biologists since the era of Darwin. In recent years, a series of seminal works in this field have found that the mTORC1 pathway, which is the central hub of nutrient sensing, can convert nutrient and growth signals in the environment into growth signals in cells. However, the vast majority of studies to date have only been performed in mammalian tissue-cultured cells and have not been validated in vivo under physiological conditions. Moreover, perception of nutritional availability is often restricted to certain tissues. How individual tissues transmit nutrient signals across the body and coordinate overall developmental fate remains poorly understood.

Glucosylceramide is a special lipid that structurally integrates amino acids, fatty acids, and carbohydrates, and is very conserved in humans and other animals. Lack of glucosylceramide leads to early developmental arrest and death in humans and nematodes, fruit flies, and mice, but its molecular mechanism and physiological significance have remained unknown. In 2013, an article published in eLife by Zhu Huanhu and others from Professor Dr. Min Han’s Lab at the University of Colorado found that glucosylceramide, as an in vivo metabolite of monomethyl branched-chain fatty acids, can activate the nutritional sensing hub mTORC1 pathway to regulates C. elegans development. Recently, Mengnan Zhu and others from the Zhu Lab discovered that the main physiological purpose of the above-mentioned developmental signaling pathway is actually to sense the overall amino acid in food and correspondingly regulate the developmental fate of C. elegans; and this regulatory mechanism is also conserved in mammalian cells. However, similar to other studies in the mTORC1 field described above, how this gut-directed glucosylceramide/mTORC1 pathway coordinates whole-body development in animals remains a mystery. 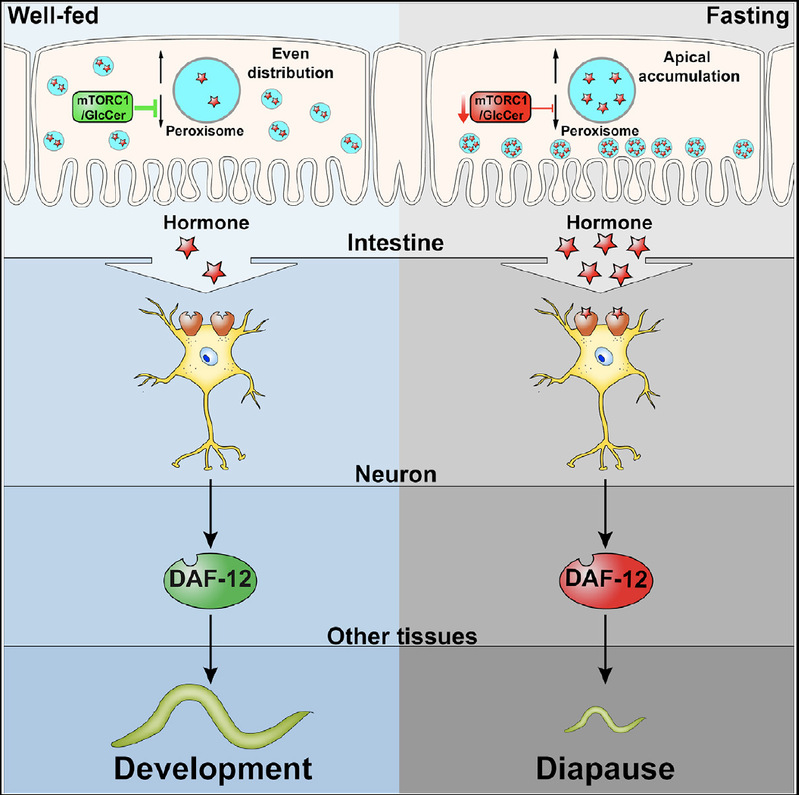 Overall, Li et al. found a gut-brain axis pathway in C. elegans that senses external nutrients and regulates development through sphingolipid metabolites, nutrient sensing pathways, the organelle subcellular localization, and hormone secretion. At the same time, the researchers also found that the intracellular distribution of peroxisomes regulated by the nutrient environment is conserved in mammalian cells, which also lays the foundation for the future understanding of similar processes in higher organisms.

Finally, what is the physiological significance of this complex model of developmental regulation? The researchers found that although the dual deficiency of glucosylceramide and peroxisomes had limited effects on C. elegans grown under abundant nutrient conditions, it significantly decreased C. elegans tolerance to starvation. From this, the researchers raised a bold hypothesis that glucosylceramide and peroxisomes may act as positive and negative regulators in animal development respectively. Just like the accelerator and the brakes of a car, the two work together to ensure that the car (animals) can adjust its (developmental) speed according to the road (environmental nutrition) conditions, thus being preserved in the evolution. This may also help explain why, in the evolution, glycosphingolipids and peroxisomes are not necessary for unicellular eukaryotic growth, but are necessary for the development of multicellular organisms.